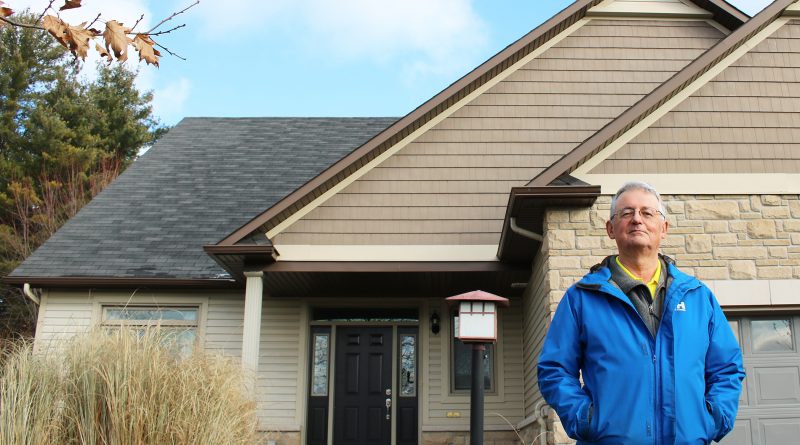 CARP – The meowing loudened as Kevin Goheen’s 19-year-old brown cat brushed up beside his chair. COVID-19

“Hey, Sibre,” he said, reaching down to pet him. Sibre and his feline friend, Tinker, have been adjusting to their transition as country cats – they moved with Goheen and his partner, Maureen McDonald, to Carp from urban Ottawa last September.

Goheen and McDonald decided during the COVID-19 pandemic to live together at a new home after living separately. They sold their respective properties in May and moved in together about a 25-minutes drive west of the Ottawa Hospital Civic Campus near Goheen’s former house of 28 years.

They wanted a bungalow so they could continue living in their home into retirement if using the stairs ever becomes challenging. “If you’re thinking of bungalows, you’re not thinking about Westboro,” Goheen said. “It just doesn’t happen.”

After losing two bidding wars for houses in Kanata and Stittsville, they found a bungalow that cost them $835,000. The property was expensive, said Goheen, but selling the two properties in the city for more than that made it an easier decision with the added space.

Goheen and McDonald’s decision to switch from an urban to rural home is part of a trend gaining traction in Ontario, Quebec and British Columbia, based on data from the Canadian Real Estate Association (CREA). The beginning of the COVID-19 health restrictions meant more people worked from home. City-dwellers began looking for good-valued properties with more space, more privacy and less noise. The rural housing market shot up as a result, even with common Internet struggles and longer commutes remaining disadvantages in the country.

“It came fast, and it came aggressive, the excitement over country properties,” Ramsay Ferguson, a real estate agent with Ottawa-based Innovation Realty, said.

A case in point is West Carleton, which had 367 units sold in 2020, according to the Ottawa Real Estate Board. That is 69 units more – a 21 per cent increase than that same range in 2019. The average sale price rose to $600,207 per unit from $513,233 as well, almost a 17 per cent difference. As the pandemic lingers and people continue to work remotely, West Carleton and other Ottawa Valley residents may still see an increase in new neighbours in 2021.

West Carleton attracted new homebuyers from larger cities in Ontario, such as Ottawa and Toronto, according to Tom Bastien, a West Carleton-based agent at Innovation Realty.

The 2020 average sale price for all home types in the city of Toronto was $986,085, according to the Toronto Regional Real Estate Board. That is about $385,000 more than West Carleton’s average. The average for detached homes in December alone was more than $1,475,000 in Toronto.

Firstly “They’re selling their homes and making a ton of money and coming here and buying pretty much the exact same home they had for half the price but on a big piece of property,” Bastien said.

One strategy is pre-emptive proposals where people submit “take it or leave it” bids higher than the asking price before the designated offer date, Clark says.

What Ferguson and Bastien say surprised them the most was people were desperate enough to buy country properties without conditions, such as inspections.

Outlying regions of the Greater Toronto Area are boosting in activity as well, such as Collingwood and near Barrie says Robert Hogue, a senior economist with RBC.

The smaller housing market in towns north of Montreal, such as Mont-Tremblant, QC, and Sainte-Adele, QC, also saw the number of sales doubled from July to September compared to the same period in 2019, according to the Quebec Professional Association of Real Estate Brokers.

British Columbia is booming in suburban and rural property sales in areas such as the Okanagan Valley, Fraser Valley and Chilliwack, according to CREA.

While Goheen says he was motivated more by wanting a bungalow than COVID-19 in his choice to leave the city, the pandemic uncovers disadvantages of city living for others, such as tighter properties and less privacy, according to Clark. That leads some people to go completely rural and move outside of neighbourhoods.

Goheen says he still noticed a difference in Carp’s sights and sounds despite being in a neighbourhood. He says he normally heard ambulance sirens blaring on Parkdale Avenue near the Civic Hospital. There is little traffic on his street compared to his old house.

“The real thing I noticed isn’t sound – it’s light,” says Goheen. “Behind the house here, there’s nothing. There is woods. That backyard is pitch black, and you don’t get pitch black in the city.” The lower light pollution helps for stargazing or other fun activities, such as the Carp Agricultural Society’s fireworks display on Sept. 26 that replaced the Carp Fair due to COVID-19, he says.

“Now, they don’t know when they’re returning back to the office and maybe they’ve struck up a deal where they’re able to stay working from home,” Clark said, adding that means they could seek larger homes with space for offices.

The pandemic has also brought the lowest interest rates since 2009 – those lower mortgage rates add to specific rural benefits for homebuyers in Canada.

“Interest rates would not be this low right now were it not for COVID-19,” Hogue said.

The Bank of Canada set its interest rate at the lowest the bank says it can safely go, at a quarter per cent, to help economic activity during the pandemic, which Hogue says he personally rounds to zero.

The Bank of Canada said in October it plans to hold that policy interest rate at 0.25 per cent until a projection of 2023.

Despite the advantages of moving to rural areas, new residents are finding some pitfalls, such as weaker Internet access and longer commutes.

Goheen says the Internet access is driving him insane during his transition to West Carleton.

“It is so bad,” he says repeatedly, laughing and rocking sideways in his office chair.

Goheen records and uploads lectures for the course he teaches in the engineering and design faculty at Carleton University.

With those Internet speeds, Goheen says it was nice to hear from West Carleton residents on Facebook that he is not alone in the area for having issues.

McCrimmon hopes the riding will receive funds in early 2021 from the $1.75 billion Universal Broadband Fund, which plans to help connect all Canadians to high-speed Internet by 2030. Low-earth-orbit satellites such as SpaceX’s Starlink and Telesat could lead to better broadband service for rural residents in this year as well, she says.

“The homework is done,” McCrimmon said during a virtual town hall on Facebook on Nov. 19. “Now, we just need to find people who are going to step up and help.”

Another potential turnoff to country living is the long drive to activities and amenities, as Judi Varga-Toth found out before her family moved to Old Ottawa South in August after living in West Carleton from 2013 to 2018.

“In the end, the benefit of the fresh clean country air and the trees and the land and all of that wasn’t enough to compensate for the fact most of the time, you saw it through the windows of the car,” Varga-Toth said.

With the advantages and disadvantages to consider, COVID-19 will remain a driver for the rural market into the future, Hogue says. Companies could continue to keep people working from home or permanently shift to that style. The return of stricter health restrictions – such as the current provincial stay-at-home order – could convince more people to move out of their smaller downtown condos as well, he said.

As for Goheen’s future, he will continue settling into his new village home and community over the winter.

“Looking forward to having a good go at the backyard in the spring and figuring out what comes up,” says Goheen. “And by then I’ll have the Internet figured out.”